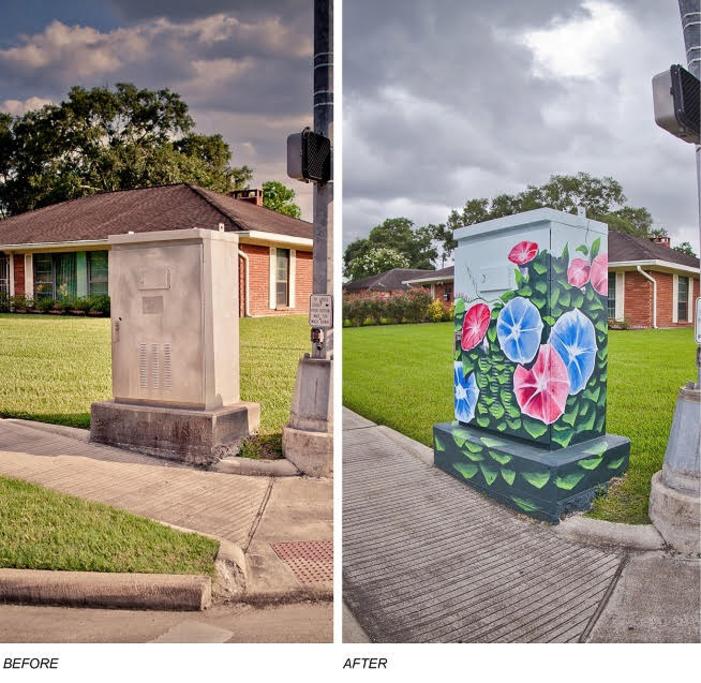 The City of Houston is gearing up to add another thirty-eight artworks to street-side traffic signal control cabinets throughout Houston and is encouraging artists to submit qualifications for the opportunity to create a mural. Known as "Mini Murals", Houston now has over 170 new original artworks in neighborhoods throughout the city that have been funded by Mayor Sylvester Turner and City Council, as well as private sponsors.

"This program is a tremendous success on every level," said Mayor Sylvester Turner. "Community murals enrich our neighborhoods, represent the diversity of our community and employ the talents of Houston artists.  People love them and we have had a lot of positive response, so we want more artists to join the roster."

Mini Murals will soon be popping up in many of Houston's neighborhoods including Acres Homes, Central Southwest, East End, Gulfton, Heights, Near Northside, Second Ward and Third Ward.

The City of Houston has contracted with UP Art Studio for program management and is partnering with the minority-owned business to expand the artist roster. Managing Partner, Noah Quiles, of UP Art Studio said, "We are excited that the City of Houston continues to be supportive of this project and sees the value in emphasizing public art through this and other public art projects.  We work hard to leverage what the City does with other sponsorships and a lot of groups see a Mini Mural as a great way to give back to the community. The cost to sponsor a Mini Mural is $2,500 and we have had management districts, neighborhood associations, corporate partners, individuals, and others sponsor murals."

If you are an artist interested in joining the registry, you can find the Open Call guidelines available here. Artists will need to submit their qualifications, including work samples, a letter of intent, and previous work experience. The deadline to submit your application will be no later than August 11, 2017 and all artists will be notified of results by August 31, 2017.

UP Art Studio will convene a panel of art experts, community stakeholders, artists and City representatives to review all submissions and select artists for the registry. The panelists include:

For more information about the City's Cultural Programs go to www.houstontx.gov/culturalaffairs/ or follow the Mayor's office of Cultural Affairs on Facebook @HoustonMOCA. your paragraph here.